Albert Wesker is a major character in the Resident Evil series by Capcom. He was the captain of the US police team S.T.A.R.S. before gaining superhuman abilities from a mutant t-Virus.

See also: Wesker's alternate costumes in MvC3, or in UMvC3

Wesker captures the weakened Marvel heroes after their battle with Galactus. He plans on injecting the Uroboros virus into their bodies and observe what happens. It is rumored to be a subtle reference to the Marvel Zombies storyline.

Wesker is very fast, allowing him to quickly switch his position around the screen. He uses his Samurai-Edge Custom handgun. as his long range attack. Also, Wesker can teleport off the attack in three different directions, and many of his moves come straight from Resident Evil 5. Due to this, he has an excellent melee range and strength and possesses multiple counter commands to maintain pressure on his enemies along with his teleports. 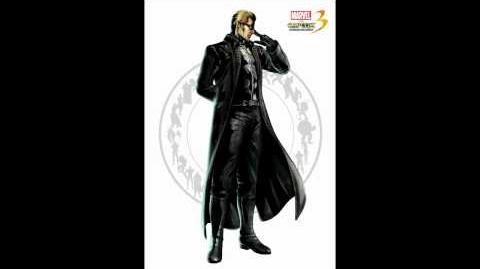 Marvel VS Capcom 3 - Albert Wesker Theme
Marvel vs. Capcom 3: Fate of Two Worlds
Add a photo to this gallery

Marvel vs. Capcom 3: Fate of Two Worlds
Retrieved from "https://marvelvscapcom.fandom.com/wiki/Wesker?oldid=77196"
Community content is available under CC-BY-SA unless otherwise noted.