Marvel vs. Capcom Wiki
Register
Don't have an account?
Sign In
Advertisement
in: Wolverine, Marvel Characters, Characters in X-Men: Children of the Atom,
and 7 more
English

I'm a cut above the rest, you're just cut.

Wolverine, real name James Howlett or commonly Logan, is a character from the X-Men series by Marvel. He is a mutant with animal-keen senses, retractable Adamantium claws, and a powerful regenerative ability who is often involved with the X-Men.

Wolverine debuted in X-Men: Children of the Atom and has appeared in the succeeding games in the series until Ultimate Marvel vs. Capcom 3.

See also: Wolverine's alternate costumes in MvC3, or in UMvC3

Wolverine's appearance is based on his iconic design throughout the X-Men series. He is a short, rugged, well-built man wearing a blue and yellow X-Men costume. His mask covers his head except his mouth and jaw, and has two dark blue "ears" joining at the nose resembling the ears of a wolverine. Underneath his mask, Wolverine has sideburns and strangely shaped hair that vaguely resembles the shape of his mask. The costume has blue shoulder pads, gloves with holes for his claws to come out, a belt with the X-Men insignia, blue trousers, and blue boots with protrusions similar to his mask.

In Marvel vs. Capcom 3: Fate of Two Worlds and Ultimate Marvel vs. Capcom 3, Wolverine wears his recent costume from Astonishing X-Men. The blue trousers and the "ears" of the boots are removed. The gloves and boots have gold metal pads on the forearms and the calves.

Like a wild animal, Wolverine is aggressive and easily angered. In combat, he sometimes lapses into a "berserker rage", lashing out intensely at anyone. Despite this, he harbors a distaste for how his instincts work and is afraid it will overpower him, but admits that it saved him a couple of times.

Wolverine is somewhat emotionally distant, which comes off as rude to other people. He is not quick to trust new people, as he relies heavily on his instincts, honed by over a century of life.

Beneath his brutish exterior, he cares deeply for his friends, willing to put his life on the line for them for his team and comrades. He has put aside his aloofness to mentor some of the younger X-Men, such as Kitty Pryde and Jubilee, he also has a great respect for Professor X.

Wolverine's most notable ability is his retractable claws. He has three six-inch Adamantium coated claws on each hand. Originally, the claws were made of bone. Due to the Weapon X experiment, his bones, including his claws, were fused with Adamantium, giving him a nigh unbreakable skeleton.

Wolverine also has a healing factor that lets him heal from injury quickly. He is also a master of many martial arts and weapons. He has keen animal senses, and years of combat experience, having fought in multiple wars

Magneto, after his defeat, asks Wolverine for the last time to join him. He declines and leaves the collapsing Avalon with the other X-Men. Later, he and Cyclops meet with Jean Grey. Jean Grey immediately rushes to Cyclops and ignores him, prompting Wolverine to destroy the presents and a photograph. Back on Earth, he decides to take a vacation. He accidentally runs into Silver Samurai and easily defeats him.

After releasing the the heroes and defeating Thanos, Wolverine decides not to use the power of the Infinity Stones for himself. He says that being a god is not for him. He then sets out on a journey to find more about himself.

Wolverine is praised by Jubilee for defeating Ryu, and asks him if Ryu is hardcore. Wolverine responds that it doesn't matter what Ryu's fame or attitude is. He respects him because he is an honorable fighter.

Wolverine notices that Akuma is following him. He confront him and says that they will settle their fight next time.

Wolverine consoles Professor X when he blames himself of the actions of Onslaught and Magneto.

Wolverine is seen maskless with his back towards Hayato.

With the stress of everything happening around him, Wolverine decides to have a drink at a club. He notices a dancer asking him out, and recognizes her as Morrigan. He laments his situation before accepting the offer, but after he finishes his drink.

Wolverine is a powerful, all-out rushdown character, sporting powerful and speedy combos. His special wall jump and decent poking range makes him difficult to pin down. He can perform advanced and damaging combos without the use of assists and Hyper Combos.

His attacks have gone under changes in each installment, and Wolverine comes in two versions in MVC2, one is the default Adamantium Claw version (MVC1 version, hence having Berserker Slash, which is something his MSHvSF version did not have), and a Bone Claw version (XMvSF version). Thus, he is the only MVC2 character to have an EX version of himself, possibly as a joke to his publicity. He is also the only character to not have a normal that acts as a real sweep, as his crouching HK knocks down far and his Sliding Claw acts as his only sweep. His Cross Slash and Brutal Claw have been great combo extenders, and his jumping HK can be a great crossup. 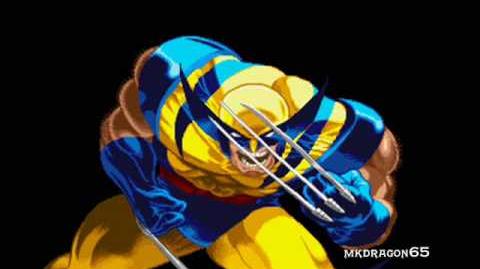 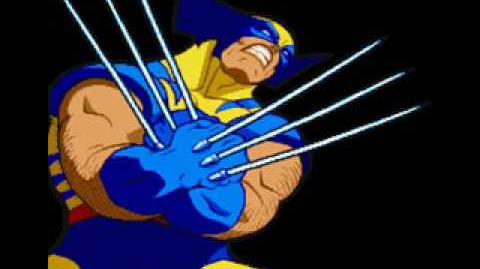 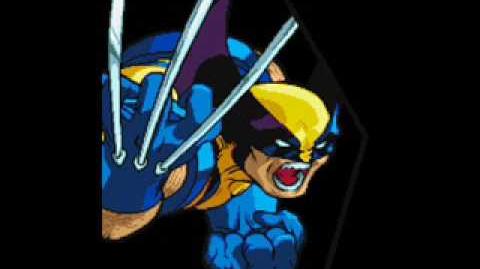 Marvel Vs Capcom-Theme of Wolverine
Marvel vs. Capcom: Clash of Super Heroes 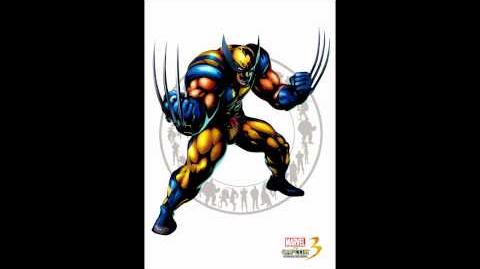