X-23, real name Laura Kinney, is a character from the X-Men series by Marvel. She is the daughter of Wolverine, having the same powers and fighting aptitude as part of an attempt to recreate the Weapon X experiment.

X-23 throws Galactus's unconscious body into the dirt as she starts bragging to Wolverine, who asks her to get Galactus off of the lawn around the Xavier Institute.

X-23's gameplay is very similar to Wolverine's, with all of her special attacks are loosely based on Wolverine's special attacks, and one hyper combo based on Wolverine's level 3 hyper. She lacks some of his attack power, but compensates that with her superior agility and mobility. Her rushing specials allows to keep opponents off balance with lightning-fast and almost unpredictable attacks. Overall, her playstyle in particular invokes an assassin theme in stark contrast to Wolverine's equally brutal, albeit less subtle berserker fighting style. 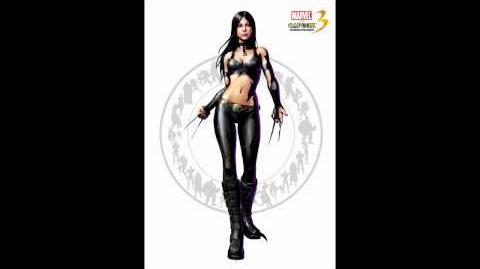