X-Men: Children of the Atom is a fighting game developed and published by Capcom for the CP System II in Japan in 1994. It is the first fighting game produced by Capcom using characters under license from Marvel Comics, and is widely praised for its faithfulness in capturing the spirit of its namesake comics, by using colorful animation and voice actors from the X-Men animated series, such as Cathal Dodd as Wolverine.

The game was later released in other parts of Asia at the end of 1994, and North America and worldwide in 1995. It has since been re-released worldwide on the PlayStation, Sega Saturn, and MS-DOS.

The game is loosely based on the "Fatal Attractions" storyline. Members of the X-Men set up a fighting tournament to determine who is strong enough to defeat the mutant supervillain Magneto, who wishes to eliminate the human population from his space station Avalon in order to free the oppressed mutants.

X-Men: Children of the Atom follows the same controls and conventions as Capcom's Street Fighter video games, where the character selected has moves that can be executed by pressing the attack button and moving the joystick in specific positions such as "quarter-circle-forward".

In addition to the six playable members of the X-Men, the game also allows players to control popular X-Men villains who want their own personal gains from defeating Magneto; such as Omega Red and Silver Samurai. Akuma was included as a secret character, as the game was released shortly after Super Street Fighter II Turbo.

The game, along with SSFII Turbo, is considered one of the first fighting games to popularize the now often-used ideas of super jumps, super combos, and Technical Hit, which means that an attempted grab or throw can be negated by the opponent. However, a player must have at least a Level 2 Gauge (about half the total bar), and while some characters simply land on their feet or recover in mid-air (like Wolverine or Omega Red), other characters escape the throw entirely and a select few can even reverse the grapple (like Iceman).

Along with its sequel Marvel Super Heroes, X-Men: Children of the Atom was the precursor to the Marvel vs. Capcom series, with elements and characters from this game having been combined with Street Fighter Alpha to create X-Men vs. Street Fighter. 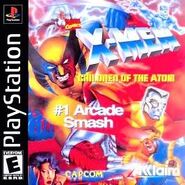 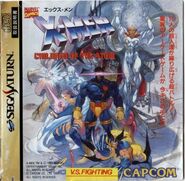 Intro with Heroes and Villains

How to Play Part 1

How to Play Part 2

Character Ad Part 4
Add a photo to this gallery
Retrieved from "https://marvelvscapcom.fandom.com/wiki/X-Men:_Children_of_the_Atom?oldid=68581"
Community content is available under CC-BY-SA unless otherwise noted.