watch 03:40
'Marvel vs. Capcom: Infinite' - Zero Tutorial
Do you like this video?

You're too slow! I read and analyzed all of your moves before you even got close to me.

Zero is a character from Capcom's Mega Man series and the main protagonist of the Mega Man Zero series. He is a high ranking member of the Maverick Hunters in charge of defeating Sigma's forces from exterminating humanity.

See also: Zero's alternate costumes in MvC3, in UMvC3, or in MvC:I

In most crossover games such as Marvel vs. Capcom series, Zero's appearance is based on Mega Man X series' incarnation, most recognizably having shoulder guards with the letter Z as of Mega Man X2. He sports blue eyes, a blond ponytail with a blue band, as well as a red helmet with several "horns" and a blue, triangular energy crystal in the center of his helmet. His body is the standard build of a reploid, despite the fact that he is technically an android, as a reploid is a replica of X built in 21XX.

The ultimate result of the infamous Doctor Albert W. Wily research, Zero was built with the intention of surpassing anything Wily had built before, and to destroy his long time nemesis's creation, Megaman, as well as his own misguided creation, Bass. Being made before the introduction of standard mass-produced Reploids and during the construction of X, his internal processes and construction are considered to be more advanced than most known robotics and on par with X's parameters and capabilities.

He is initially outfitted with an armament known as the Zero Buster, an arm cannon capable of firing of blasts of energy as well as manipulating it to launch it in special variations and projections.

During the X2 series and onward, Zero adopts and becomes the user of the Z-Saber, a beam sword that became his trademark weapon. Not only capable of manifesting itself as a beam of light, it is also capable of changing its consistency, ranging from different wavelengths of frequencies, different states of energy, including pure electricity, ice, and fire, and to even various mass compositions, including metal, crystal, and even foliage, to suit a variety of situations in combat and on the field.

Zero is also outfitted with the Learning System, a system not unlike the Variable Weapons System in its copying and adaptation of certain weapons, but adapts various abilities and techniques of opponents and enemies, and even goes as far as copying the kind of power and possible energy projection emitted from the attack.

As an android created by Dr. Wily, he possesses superhuman strength, speed, and durability. All Reploids possess these attributes, but it is unknown on how stronger they are than humans exactly.

However, underneath his exterior displays of ability and performance, just like X, Zero holds an immense and potentially limitless capability for adaptation and power. Via his power grid and many gameplay incarnations of him, Zero is a traditional Glass Cannon (weak on defense but strong on offense) as in the main Mega Man games, most of his attacks did an immense amount of damage. But in his fighting game counterparts, Zero has his traditional low health but makes up for it with great combo potential and versatility despite not being overly strong. Thus, it can be stated with Zero's swordsman skills and with his other abilities, Zero can adapt to practically any foe he fights, and his long combos tend to show Zero often and always fights at his best and does not tolerate holding back.

The reason for his low health is mainly due to his creator and Dr. Light being unable to provide future armor upgrades for him that involve his durability (barring the secret Black Zero armor), and thus his defense mainly stayed consistent throughout the Mega Man X series. Despite this, he makes up for this with skills in other fields/strengths and great adaptation to many situations.

Zero hitches a ride with the Silver Surfer back to his own world. Silver Surfer, instead, accidentally takes Zero to Neo Arcadia, the setting of the Mega Man Zero series, due to him not being able to tell the two apart (as they are essentially the same world in a different time). They soon travel to a different world in order to take Zero back to his homeworld.

Zero is amongst the heroes and villains who are brainwashed by Ultron Sigma and Grandmaster Meio. He is first spotted by Strider Hiryu, X, Captain Marvel, Nova and Rocket Raccoon. According to X, his core routines were changed to allow Ultron Sigma controlling him. After being defeated, his core routine is restored and returning to the right side once more.

Zero plays similar to his TvC counterpart, and like since his SvC Chaos counterpart, is versatile as a Rushdown/Cross-Up Point character. In gameplay, Zero mainly uses his trademark weapons, the Z-Saber and Z-Buster. He also performs a wide variety of attacks and techniques that he gained during the X series (having a projectile and anti-air makes him a standard shota clone). Zero focuses on an offensive playstyle that has strong rewards and high risk, as Zero's normal attacks and special moves don't do a lot of damage on their own, but are meant to be strung together in super-long and highly damaging combos, a la gradually grinding down his opponent with skillful swordplay with no holds barred.

Zero's theme song is a remix of his boss theme in Mega Man X2. 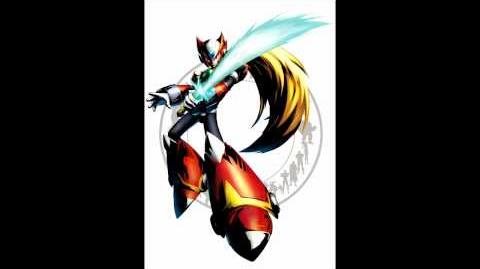 Retrieved from "https://marvelvscapcom.fandom.com/wiki/Zero?oldid=77074"
Community content is available under CC-BY-SA unless otherwise noted.